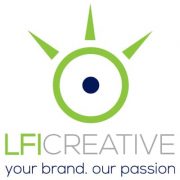 Always pay for the best professional you can….

I had a chat with a client the other day, a good person who wanted to do his own logo. He showed me what he had done and to be honest it was pretty amateurish, but he knew this and asked “what do you think of it?”..I said “do you want me to sugar coat this or be honest?”. I basically told him that “you get what you pay for!”. When I’m looking for a service you can do yourself, it will usually cost you in the long run. He totally agreed with me and by the end of our conversation comparing his skill to another that will do it cheaper there is always someone will do it cheaper.

Why use an agency like LFI Creative? You get the benefit of not only a fresh, new design but the expertise that comes with having a creative team of people on hand to help you navigate digital marketing, advertising, and branding elements of your business.
The benefit of having an agency to help you with your corporate brand is significant and will show in the long run for your business and brand.

Most of us on LinkedIn are professionals and when I read posts, I know pretty quickly if they are focused individuals and are professional and that will they do a good job for my clients when I refer them, as it will come back to me if the work is done badly or not in a professional manner.
#creative #branding #business #logo #professionallogo #help #people #team #marketing #designagency

The BMP format is an uncompressed raster file designed to display high-quality images on Windows and store printable photos.

Although you may see this format occasionally referred to as Device Independent Bitmap (or DIB), a BMP file stands for bitmap and is commonly pronounced bump. Microsoft originally developed the BMP format for its Windows operating system to maintain the resolution of digital images across different screens and devices. It can store two-dimensional images either in color or black and white. In the 1990s, Microsoft developed the BMP file format to allow image data to be displayed independently of Windows devices. Why did this matter? Once the files could be viewed on different devices, the new BMP format — which prevented images from becoming blurred or distorted — removed the need for a graphics adapter.

For many of the same reasons that BMP files are great for storing photos, they’re also a good option when you want to print intricate, full-color photos. Unlike JPEGs, which compress image file data, BMPs don’t lose data each time you edit and save them.

BMPs are generally large, uncompressed files. They are great at handling detailed, high-quality images, but at the same time, this them harder to share and store. JPEGs, on the other hand, are easy to share or use on websites because they’re compressed into a smaller size. But each time you compress a JPEG, it will lose some of its image data. Discover more differences between BMPs and JPEGs.

📢 EXHIBITION ANNOUNCEMENT 📢
We are delighted to supply our friends at Haughton Holiday Park with with Business Cards, Flyers and Pop Up Banners for their exhibition at Love Touring this weekend.
Be sure to see them at P&J Live this weekend from 28th – 30th October.
https://haughtonholidaypark.com/
#exhibition #holiday #aberdeen #caravan

The GIF (Graphics Interchange Format) is in normal use limited to 256 colours. GIF is most suitable for storing graphics with few colors, such as simple diagrams, shapes and logos as it uses compression.

It is a very effective way of displaying subtle animations, which can bring your website to life. This is probably the most popular on social media – how people are expressing themselves through GIFs in reaction to a certain situation or event. GIFs are great for adding humor to your posts (or messages) and allow you to connect to your audience. They also can showcase the personality of your brand.

You can also give your audience a closer look at your product in a GIF to show off some of the details that help entice them to purchase or download.

For more information on how GIFs can help your business, just get in touch!

The PNG file format is widely used on websites to display high-quality digital images. Created to exceed the performance of GIF files, PNGs offer not just compression, but also a much broader and brighter color palette.

PNG is short for Portable Network Graphic, a type of image file. It’s particularly popular file type with web designers because it can handle graphics with transparent or semi-transparent backgrounds. The file format isn’t patented, so you can open a PNG using any image editing software without the need for licensing.

PNG files, which use the .png extension, can handle 16 million colors — which definitely sets them apart from most file types.

PNGs are the next evolution of the GIF format, which had already been around for eight years when PNGs first launched. GIFs had several drawbacks, like requiring a patent license and a limited range of just 256 colors, which didn’t keep pace with ever-improving computer screen resolution. To avoid these issues, PNG files were made patent-free and included a significantly larger color palette. PNGs, as opposed to GIFs, are a single-image format — they don’t support animation.

Designers often use PNG files for logos. That’s because the format supports transparent backgrounds, which means designers can layer logo files on different backgrounds in a way that looks natural.

Portable Document Format (PDF), standardized as ISO 32000, is a file format developed by Adobe in 1992 to present documents, including text formatting and images, in a manner independent of application software, hardware, and operating systems. Each PDF file encapsulates a complete fixed-layout flat document, including the text, fonts, and other information needed to display it.

PDF files may contain a variety of content besides flat text and graphics including logical structuring elements, interactive elements such as annotations and form-fields, layers, rich media (including video content), three-dimensional objects and various other data formats. The PDF specification also provides for encryption and digital signatures, file attachments, and metadata to enable workflows requiring these features.

Adobe Systems made the PDF specification available free of charge in 1993. In the early years PDF was popular mainly in desktop publishing workflows, and competed with a variety of formats such as Common Ground Digital Paper, Farallon Replica and even Adobe’s own PostScript format.